“To ask the Chief Executive to outline what parking plan he has put in place for St. Colmcilles National School in Knocklyon. There will be over 1,600 students on campus from September with only one entrance/exit, what traffic relief options is he considering?”

The congestion at the school junction will be monitored in September. The relevant monitoring equipment is being installed. The junction at Knocklyon Road, Idrone Avenue and Scholarstown Road is a staggered cross road, a signal controller which reacts to traffic conditions is installed. It is configured to insure that the entire junction is prevented from gridlock and the maximum amount of traffic is accommodated given the layout of the roads in and approaching the junction. The junction is operating to maximise traffic throughput consistent with the safety of vulnerable road users.

In addition, in 2014 the National Transport Authority granted funding to South Dublin County Council for a ‘Green Schools Cluster’ project. This project involves liaison between a number of schools at Ballyroan in the Rathfarnham area, An Taisce Green Schools, the NTA Green Schools Coordinator and South Dublin County Council. The aim of the project is to engage with the schools, assess current levels of walking and cycling to the schools and identify measures that could encourage walking and cycling to the school. The NTA have provided funding to implement the programme and also to carry out improvements to pedestrian and cycle facilities and improve permeability in the vicinity of the schools. Please note the project description is specifically tailored to facilities for pedestrians and cyclists. The schools that are part of the programme were the schools based within the Ballyroan / Ballyboden cluster as follows:

St. Colmcilles Senior National School
Sancta Maria College
Coláiste Éanna CBS
Scoil Naomh Padraig
Ballyroan Boys National School were also surveyed as they were in close proximity to the schools in question. As St. Colmcilles are returning this year to Idrone Avenue, the survey was changed to allow them to feedback information about their new location. The surveys are currently being collated and examined and a report will follow. However preliminary examination shows a number of issues reported in relation to walking and cycling to St. Colmcilles new location at Idrone Avenue, in particular from Orlagh Roundabout to the new school location.

South Dublin County Council are undertaking detailed design for a section of the Tallaght to Ballyboden Cycle Route which passes close to the school on Knocklyon Road. The National Transport Authority have agreed to extend funding, so South Dublin County Council have requested the consulting engineers to extend their brief to examine and upgrade as required, the provision of walking and cycling facilities north and south from Knocklyon Road from Orlagh Roundabout to the school. topographical survey is currently underway. It is envisaged that the detailed design of these walking and cycling facilities will be complete by year end. Once completed a further application for funding can be made for tender and construction phases.

“To ask the Chief Executive to outline the current situation with the tree pruning programme, outlining list of estates to be dealt with over the next 12 months?”

The 2014/2015 Tree Maintenance Programme is currently being compiled and will be presented to the November meeting of the Rathfarnham/Templeogue-Terenure Area Committee.

“That South Dublin County Council employ outside contractors to help deal with the considerable backlog in their tree pruning programme to help ensure that the programme is complete within 12 months.”

Pruning, removal and planting of street trees is undertaken under the Council’s annual Tree Maintenance Programme which currently operates on a seasonal basis over a 4-month period between November and February. An annual Tree Maintenance Programme is compiled in response to requests for arboriculture works received from members of the public and public representatives via the Council’s Customer Care Contact System along with works identified by Council staff. In recent years, the programme has increasingly focussed on tree pruning and removal works on entire roads or whole estates as opposed to acting on isolated requests for arboriculture works. The objective of this approach is to increase the efficiency and productivity of the tree maintenance crews and to advance a proactive programme of cyclical pruning that is targeted at priority locations where intervention is most needed.

The Tree Maintenance Programme for 2014 was presented to the various Area Committee meetings during last autumn with progress updates provided at the March/April meetings of the Area Committees this year. The first phase of the 2014 Tree Maintenance programme was completed from January to February when Public Realm operations staff were then reassigned to primarily grass maintenance works during the growing season. The programme resumes again in November through to December. Any works not completed during the first phase of the programme are scheduled for completion during the second phase at the latter end of the year.

Since May 2014, a supplementary tree maintenance crew has been assembled from staff within the Public Realm section to undertake street tree pruning and removal works on a year round basis. This crew is particularly focussed on advancing the programme of cyclical pruning in whole estates whereby tree maintenance will be completed on every tree as required within a particular estate or road. Other measures to further enhance the delivery of the Council’s street tree maintenance service are currently being developed and include the preparation of a draft tree management policy to guide the Council’s approach to tree management throughout the county. In addition, in order to improve efficiency in handling requests for tree works from members of the public and public representatives as well as inform the development the annual tree maintenance programme, the Council is seeking to install a street tree management system to assist in managing the enquiry, inspection and work history of every street tree within the county.

“To ask the Chief Executive what is the current situation with the playing pitches at Elkwood? Can he please confirm what provision has been made for local sports club, Knocklyon United, and can he also please outline the future plans for the Elkwood Pitches?”

The football pitch at Elkwood has recently been let to juvenile soccer club under the Council’s Pitch Letting Process. This pitch will continue to be one of the 165 pitches offered for letting by the Council under the pitch letting process for the 2014 /2015 season.

KUFC were allocated 4 pitches for 2014/2015 and alternative pitches to some of these locations are also being examined.

Separate to all of the above, SDCC is committed to supporting KUFC’s continued growth and building on the club’s achievements. To this end, the Council will work with the club to advance a 5 year development plan for KUFC to ensure the club’s continued success and development.

“To ask the Chief Executive how much is the proposed cycleway from Bushy Park up through Church Lane in Rathfarnham village going to cost SDCC and would the cost be reduced considerably by shelving plans to build a further bridge as proposed by local residents, by redirecting the pathway through the Fairways Estate?” 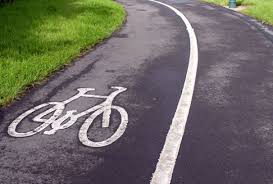 A feasibility study, funded by the National Transport Authority (NTA), for a Greenway cycle route along the River Dodder from Dublin City Centre to Bohernabreena was completed in 2012. The Dodder Greenway has significant potential to accommodate commuters, recreational users and tourists and to support business in as well as to enliven Villages along its route. As part of the preliminary design of the Greenway, it is necessary to consider how access to the route can be improved for potential users and to ensure good connections to nearby attractions and services.

The existing bridge is not suitable for cyclists nor is it universally accessible, therefore while it is a well-used and popular bridge for pedestrians, it would not provide adequate Quality of Service for a proposed Greenway Route. With regard to any proposed new bridge, this is currently at a very early preliminary stage design and there are a number of factors to be considered.

These include the location of any new bridge in the context of objectives that include improving links to Rathfarnham Village and Bushy Park. There are also technical factors such as compatibility with the River Dodder Flood Risk Management Plan. Off-line route detail has also yet to be considered. When the design process for a bridge and access routes has progressed sufficiently, a proposal can then be made that can be subject to costing and the necessary public consultation.

It is noted that the Council is likely to be dependent on the National Transport Authority and/or the Department of Transport and Tourism to secure funding to progress the Dodder Greenway.

“That the Chief Executive report that the new bridge joining Firhouse and Tallaght to form part of the new Tallaght to Ballyboden and Dodder Valley Greenway cycle route will be securely lit and will have 24hour CCTV linked to the local Garda Station.” 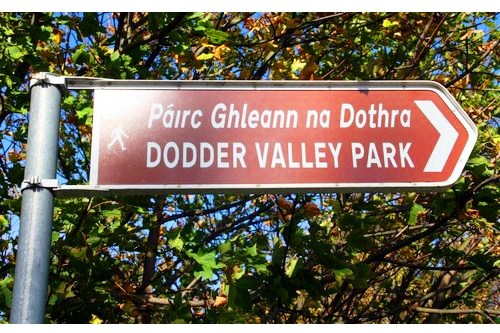 Phase One of the Tallaght to Ballyboden Cycle Route; the Pedestrian and cycle route and bridges at Dodder Valley Park commenced on site on the 19th March 2014. This is the first phase of a significant new project by South Dublin County Council, funded by the National Transport Authority, which will form part of a wider network of new high quality cycle ways proposed throughout the Dublin region.

The Tallaght to Ballyboden Cycle Route achieved Part 8 planning permission at the end of 2012. The portion of the route currently on site links Firhouse Road with Old Bawn Road and Seskin View Road via the Dodder Valley. The project will provide two new pedestrian and cycle bridges, one over the Dodder and the second over the Ballycullen stream and will increase links between the existing communities of Tallaght and Firhouse, by providing more direct routes for cyclists and pedestrians. The bridges will join Firhouse and Tallaght mid-way between Old Bawn and the M50 and will form part of both the Tallaght to Ballyboden and Dodder Valley Greenway proposed cycle routes.

The project includes for both public lighting and CCTV. The CCTV footage will be linked to both the monitoring station at County Hall and Tallaght Garda Station.

“To ask the Chief Executive to confirm that he will implement a 3 hour maximum stay parking period for 94 of the 112 spaces in the main car park at Rosemount Shopping Centre. This will allow 18 all-day parking spaces available to those who currently use them during the day, while having regard for local residents and the potential over-spill of all-day parking into the neighbouring roads, once a maximum stay period is imposed?” 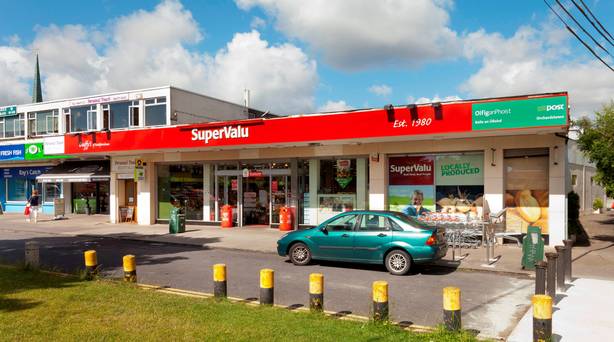 The matter will be examined and a report presented to the members. The Council is entitled to make Bye Laws under Section 101 of the Road Traffic Act 1961 to manage the use of car parks under its control. In order to carry out the request it is necessary to prepare a Bye Law to this effect which would require the approval of the full Council following a full consultation period.

“To ask the Chief Executive how many estates in the Rathfarnham area have applied for and are still awaiting Neighbourhood Watch and No Dog Fouling signs from SDCC?” 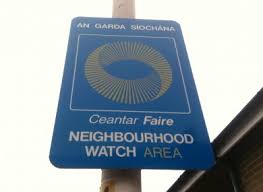 Applications for 5 Neighbourhood watch signs in the Knocklyon area have been received. The requested sites are being inspected. The applicants will be advised of the cost of the signs and their installation in the coming weeks. Once payment is received the signs will be ordered and installed as soon as practical.

A Dublin Regional Committee was formed in 2013 to tackle the dog fouling issue, part of the agreed campaign involves anti dog fouling signage. The agreed signage has been received and arrangements are currently being made for the installation of these signs. To date there have been 14 requests from estates in the Rathfarnham area.